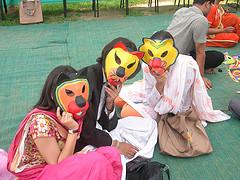 It is everything and clearly well-known. The society lives in a wave of lies and contradictions. All bought, vendidos and forgotten in the blackout proper it to be. All the lies that had been said continue corroding on the inside as if they were verdadess. The planned coincidences are taken in account as if they were simple words that the nothing would lead. the shame that I feel to be part of a corrupted and bought nation only increases to each day. To each as, higher walls if raise between us, creating a division each more errifying time. The fears, secrets and pains make with that the penalty prevails. Thus, they define in them as courageous, for choosing the survival on the contrary of the death. For backwards of a said word, if they never hide imagined histories What it is hidden behind the masks they are only people, who if dissimulate super-heroes of the native land to castrate our desires. They are manipulated and manipulating, simple mortals who provoke the proper death.